How to choose between a monocular and a spotting scope

The monocular can really be seen as a miniature version of the spotting scope since they share a number of commonalities. Both are to be used with one eye and are fitted with prisms to provide image correction. Perhaps more important when dealing with a comparison between the two, they overlap in functionality to a great extent. While most of you won’t probably be taking a spotting scope when trekking through narrow mountain paths, or a monocular to a stargazing party, they can both be used efficiently for hunting and bird watching, with the advantages and drawbacks available to each.

The most obvious difference between the two is the size and the magnification power that comes with it. At around 20x of magnification, the smallest scope starts well above the higher ranges for monoculars, which is about 10x -12x. Besides bringing images a lot closer, you will also be able to effectively cover a larger distance with the bigger optic, since most spotting scopes allow for zooming. How does this translate to real life? 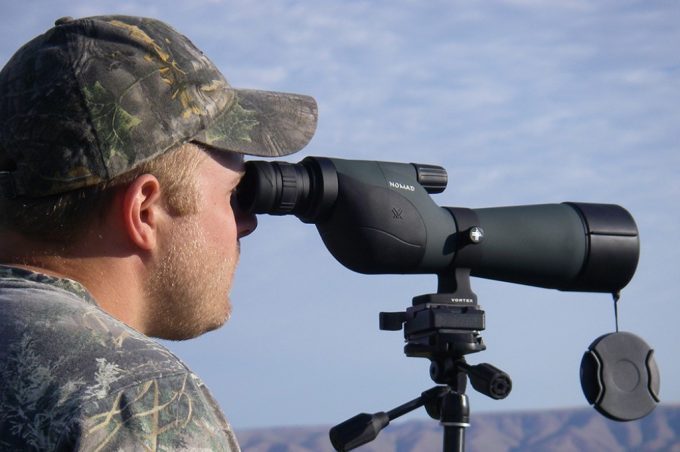 When it comes to bird watching the monocular’s smaller size will allow for good portability, meaning you will be effectively able to carry it around with you in a vest pocket, purse, or even on a keychain in some extreme cases, without coming off as a weirdo. We all know how important is for bird watchers always to be ready for an unexpected sighting, and the monocular will be the piece to have on you for just those cases.

The spotting scope, on the other hand, will allow you to see more detail, without the need to get close to the birds. This will prove ideal for setting up in a good spot to observe large flocks, as well as smaller, faster-moving birds that might chance within its wide field of view. Smaller spotting scopes, which aren’t that much bulkier than a mid-to-large size binocular, can be used free-hand, especially if supported on a knee or backpack, but don’t expect to find it easy to stabilize the image!

Smaller spotting scopes can do an equally good job for hunting, especially as staying well away from your objective is more important in this case, and its wide lens will also allow you to operate during twilight hours effectively. A special bag to carry it will be a given, however, and don’t expect to be able to train your rifle on the target you’ve spotted with the same speed as you would if carrying a monocular.

You can fit a smaller, 5x or 6x monocular inside the front pocket of most hunting jackets, from where it is easy to just pick up for snap views of the animal you’re stalking between moving. This is obviously very convenient and will allow for a lot more freedom of movement than if you were using a bulky spotting scope.

However, with a smaller aperture size, which allows for less light to be drawn in, the monocular won’t do a stellar job during dusk hours. There is also the comparatively small range and field of view to consider, as quicker pray can more easily get out of your sight.

While actual durability is a matter of construction — that can vary greatly between models in each category depending on the material used and the presence of rubber armour — small size offers an additional factor of safety all on its own, as a lighter item that’s more comfortable to handle and store safely will be easier to keep from bumping on rocks or tree branches, harder to slip from your wet hand, etc. etc. 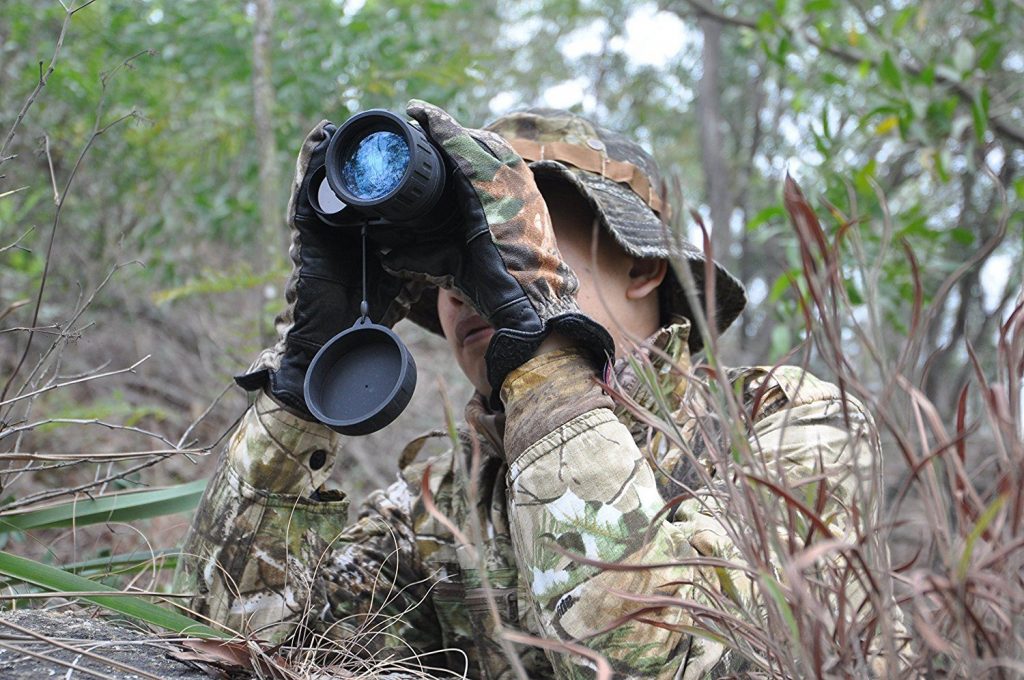 For casual urban use, like taking a look at the pigeons in your local park or checking out the plate numbers on a car, a compact monoculars comparison, between only items of this type, will be more fitting than what we are undertaking here, as the spotting scope will only be good for admiring vistas from belvedere spots, spying on your neighbours, or keeping situational awareness if you’re a police sniper.

Another, less obvious feature that adds to the functionality provided by the monocular is that it can double as a magnifying glass because if turned upside down, it can focus on objects that are just a few inches away. This will allow you to study the details of rare insect and flowers, or even pair it with a camera for some extreme macros.

The focus on a spotting scope does cover a long range, but such an item is not really meant for studying things that are just a couple of feet away, like the plumage on the bird in the nearest tree, for example. In all other criteria having to do with performance, the spotting scope will blow the monocular out of the water, with the added caveat that you will have to pay a comparatively large price for the added power.

Larger scopes can even compete with telescopes for viewing the night sky. As we’ve said, a large objective lens allows for a lot of light to get in, even the one radiating from very faint stars. Also, the exit pupil diameter on a scope tends to be fairly large, more sizable than what you’ll get with an upper range binocular, so there’s no need to worry that you’ll get a dark frame with your bright stars.