Home » Monoculars » A Guide to Birding With a Monocular

A Guide to Birding With a Monocular

Monoculars can be a pretty impressive piece of gear if you know how to use them properly. In this case, we recommend checking out reviews of monoculars before choosing a model. As for now, we will be focusing on some essential tips that are meant to help you out in spotting birds with this famed single-eyed piece of gear. 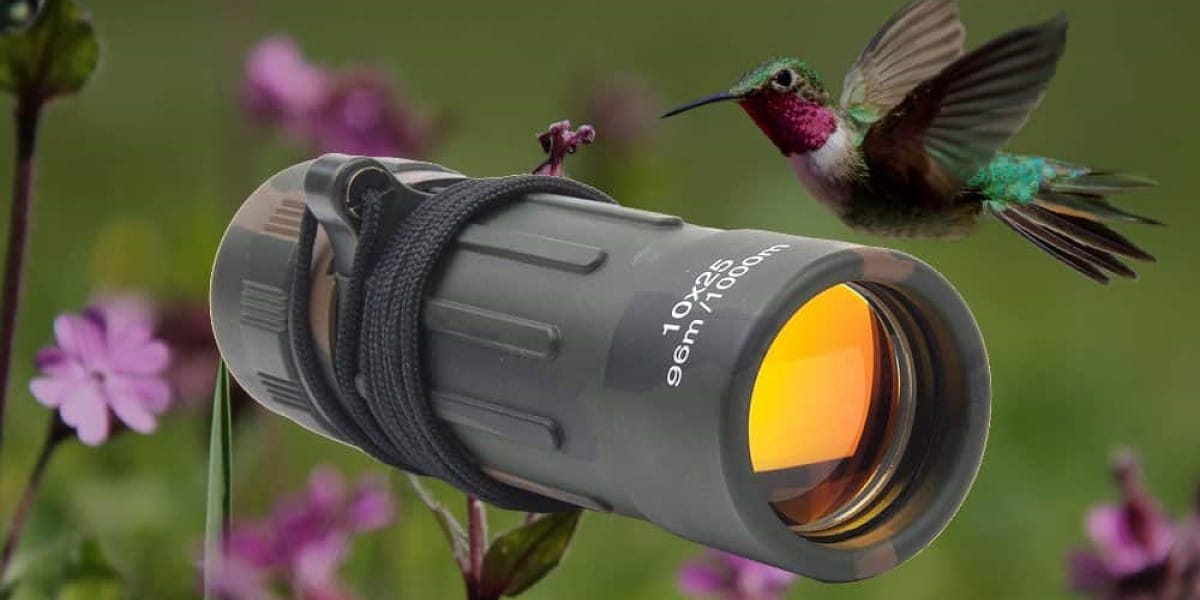 Most hunters opt for laser rangefinders and a pair of binoculars to do their job. But many often forget that monoculars, especially the modern ones, can also be very handy for everyday birdwatching. They’re simply easier to carry and use overall, despite having a few flaws here and there when compared to their two-eyed counterparts.

In layman’s terms, a monocular is just a one-eyed binocular. You might even compare it to a telescope or a spotting scope, except this one fits in your pocket. The main advantage of a monocular is that it’s not any longer than your fist, so you can easily store it inside your pants’ pocket or somewhere in your jacket. No more need to carry a bag with you everywhere.

It’s compact and lightweight, which further enhances its portability. And it can also double as a magnifying glass. You can even wear it around your neck for even more convenience. The price is usually much cheaper than that of binoculars, and you can still observe birds from a distance without getting too close and scaring them off.

Best of all, a monocular caters to users with impaired vision in one eye or with extreme variations of vision impairment between both eyes. These are all the main advantages that you might want to take into consideration if you’re looking forward to birding. Now that we got all of that out of the way, let’s see the disadvantages when compared to binoculars.

While having something compact, lightweight, and dependable may sound promising, it’s worth noting that monoculars do have certain disadvantages when paired against binoculars. For a start, you won’t have the same wide-angle view that binoculars provide. Monoculars are meant for focusing on targets rather than getting a panoramic view.

So if your aim is to get a better landscape view of a group of birds rather than getting up close to a single one, monoculars aren’t for you. At the same time, this also affects how well you will be able to track moving targets. Getting a good zoom on a bird sitting in a tree is insanely easy with a monocular, but once the bird decides to move, it’ll be far more difficult to view it.

Also, despite its advantage for people with impaired vision or with massive vision impairment between their two eyes, getting your eyes strained is far more likely to occur faster when using a monocular. Monoculars aren’t comfortable to glass with for long periods of time, so, again, this presents a major disadvantage if you want to use them longer during the day.

Tips on how to make the most out of a monocular

Now that you know the advantages and disadvantages of monoculars over binoculars, it’s time to evaluate what you can do to get the most out of them.

First, use your monocular sparingly. Minutes at the time, at most, to avoid eyestrain. Try to evaluate parts of the land slowly and see where birds tend to gather. Don’t try keeping up with their high speed when they are flying. Just wait for them to sit down on a tree branch and observe them then.

One more neat trick you can try is switching which eye you’re using the monocular with. This way, you’ll be able to use the monocular for a longer time without having to take a break. And finally, even though cheaper monoculars might not zoom as well, try to keep your distance. If you scare the birds, you won’t be able to observe them anymore and you’d have wasted your time.

Are there any bonus features on more premium binoculars?

If there’s one thing everybody loves about capitalism, it’s the fact that you have a wide variety of products that you’re free to choose from. If your budget is slightly higher than the average Joe’s, you can be sure that you’ll get a couple of features worth the money.

Some monocular models have much better zooming capabilities, rivaling even those of high-end binoculars. As such, you’ll be able to spot birds from a greater distance without the risk of disturbing them.

Premium models might also include a compass, which is useful if you ever find yourself lost in the woods. Combine that with your smartphone’s GPS capabilities, and you’ll have a much easier time getting back on track and going back home.

Yet another technical add-on for premium monoculars is a rangefinder. As the name implies, a rangefinder will show you the distance between you and the target you’re focusing on. If you’re a simple hobbyist, this might not seem all that useful, but if you’re a photography enthusiast or a hunter, having such a tool is a must.

Night vision is useful for obvious reasons. Maybe you’ll find yourself in a dense forest, or maybe you prefer birding during the night, in which case night vision is not only useful but imperative. And it will also help you spot potential danger in case you’re lurking in a forest at night, such as snakes or wolves.

Finally, probably the most useful for amateurs, a built-in image stabilizer will help you out immensely if your hands are shaking or if you want to focus slightly better on moving targets. And, in case you want to take pictures, the advantage should be already extremely obvious. 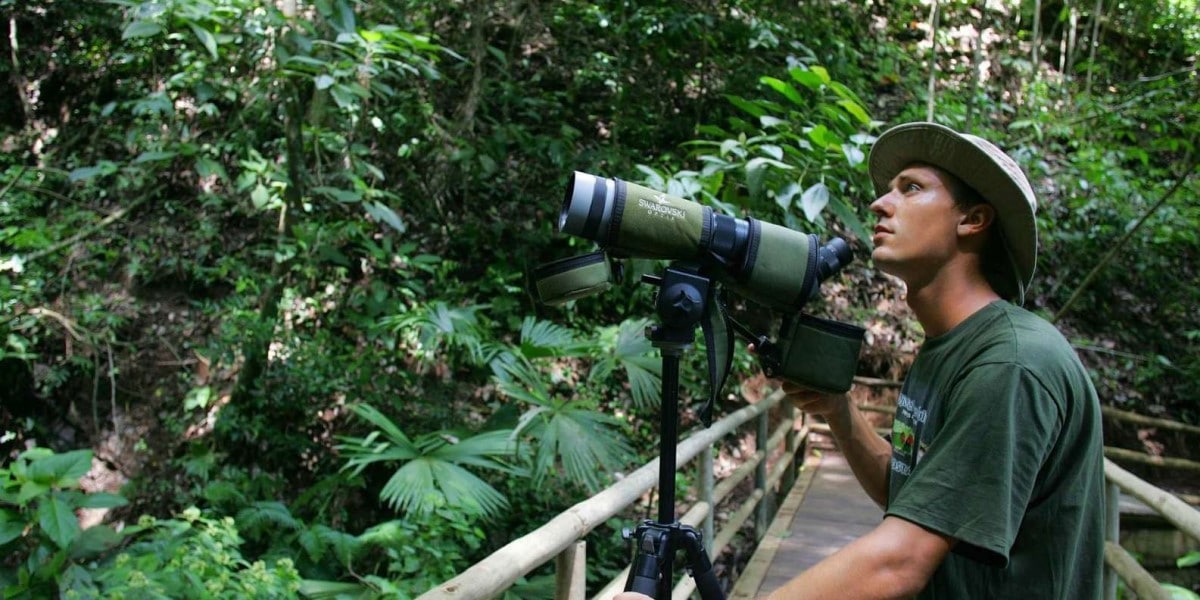 The social aspects of using monoculars

When you’re out and about in the woods, no one will probably consider having a monocular strange, but the same cannot be said about using it in public places. Some people might want to use their monocular for birding in the comfort of their parked car, but it might not be such a wise idea.

You might attract unwanted attention from people who are, to a certain extent, rightfully paranoid. As such, you might find yourself questioned by the police, which will lead to a waste of your precious time and even a visit to the police station if the particular cop isn’t feeling too nice at the moment.

However, since monoculars are usually slim and short, you’ll have no problem hiding it and making it less obvious that you’re actively stalking something. Just keep in mind that if you do get spotted, it might appear weird to certain people. There’s no debating the advantage of monoculars when it comes to stealth in this situation.

If you were to be using binoculars, you’d have a far harder time trying to conceal them and avoiding suspicion.

Other practical uses for monoculars

If you want to take some wildlife photography, the best option is to use a spotting scope, but the next best thing is to use a monocular. Since a monocular is lightweight and compact, you’ll be able to take it out quickly to view a deer up close before it manages to spot you.

For visiting galleries, monoculars are also quite useful, especially if you have trouble reading small text. Many people use a monocular in a museum when trying to take in all the fine details of an ancient artifact. Speaking of museums and artifacts, a monocular will also help you see the fine fibers of a fossilized bone. Truly magnificent for history enthusiasts.

While binoculars are usually much better for birding, monoculars can also yield great results as long as you follow the aforementioned guidelines. We recommend monoculars to hobbyists and amateurs especially because of their low weight and ease of transportation.

For professionals, monoculars might seem like a joke. But just like with anything in life, this tool also has its purpose and its target audience. It’s up to you to decide whether a binocular or a monocular is the right choice.

Don’t forget to check our review articles for the best binoculars and monoculars on the market to make your purchasing decision that much easier. Good luck and good birding!