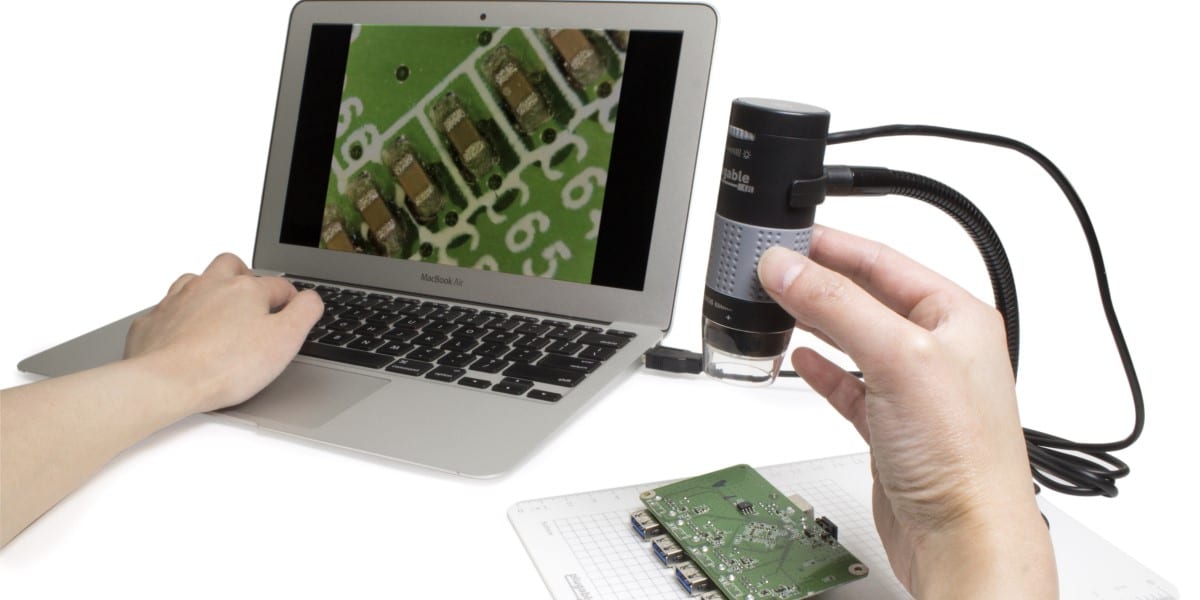 This Plugable Technologies model is a compact microscope that weighs in at just 9.6 ounces.

The model includes an integrated camera of which the resolution is 2 megapixels.

Given that it comes with a number of four built-in LEDs, you will be able to take advantage of this illumination system and distribute all the light you might need over the objects or specimens that need to be examined.

Capturing an image is made easy thanks to the capacitive touch button that this unit has been equipped with.

The software that can be downloaded via the manufacturing brand’s website has been shown to be compatible with a broad range of operating systems that you might have installed on your computer or laptop.

The maximum magnification of this product is 250X.

The observation stand has graduated marks that can help users perform easy measurements.

This Plugable Technologies unit is one of the easiest to use we have come across during our entire research process. On the one hand, since it weighs less than 10 pounds, it’s a portable alternative that you will be able to carry around in a bag or backpack, without feeling the strain of such a weight. On the other hand, since it is a USB unit, all you have to do to get it working is connect it to a storage device such as a computer.

The 2-megapixel camera resolution seems to be more than enough for most owners as the product has garnered favorable reviews in this sense. You may utilize either the driver or the capacitive button that can be found on top of the main component of the microscope in order to capture an image.

It would have been very difficult to get some natural or artificial lighting on your subjects if it weren’t for the built-in illumination system that this unit has been equipped with. The product has four LED bulbs that distribute the light evenly and make examining coins a breeze as the diffuser does its job and raises up to par every time. Shiny objects can be analyzed with ease as there won’t be any reflection occurring.

The driver that you will require in order to capture and store the images on your laptop or computer can be downloaded using the manufacturing company’s website. From what we have gathered, it appears that there are no compatibility issues, whether you own a Windows, Linux, or Mac OS X device.

In order to make it considerably easier for students to measure certain parts of the specimens, the observation stand features graduated marks with the help of which you can find out the exact size of the portions that might be of some interest.

The software does not allow users to specify the image directory, which seems to bother several owners who would have appreciated if they were able to do just this. You’ll have to resort to copying the images from the designated folder to the one of your preference.

Hi Curtis. You should contact Amazon directly to help you with this as we’re not involved in any transactions. We’re just reviewing the products that are being sold on their platform.