Fishing by the barometer

As every angler surely knows, the water temperature, light level, and moon phase can have a significant impact on your fishing success. With that said, there is one big factor that often gets overlooked, and for an understandable reason. The barometric pressure may not be as easy to predict as the other elements mentioned above, but it has a notable influence on fish behavior.

You’ve probably already noticed that, but you never connected the air pressure as being the cause of it. Think about how many times you’ve enjoyed a good day of fishing only to have the action shut down mysteriously upon the approaching of a storm or bad weather.

It can take days for fish to come back after the passage of a storm and knowing how to interpret the data of your trusty barometer can help you plan your fishing days efficiently. So what is the barometric pressure, why does it affect fish, and how can you use it to get the upper hand? These are the questions we will try and answer below. 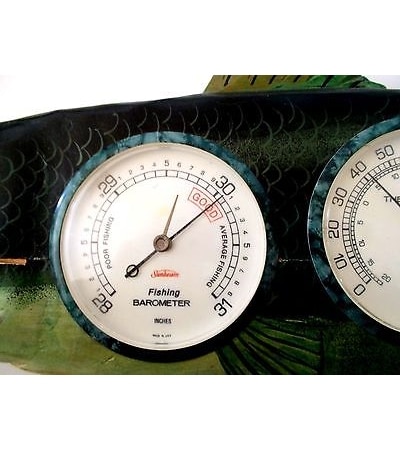 The barometric pressure is the weight or mass of an entire air column on a unit of surface area at sea level. It is crucial when it comes to weather observations as its fluctuation indicated the movements of weather systems and fronts. This pressure can be measured in inches or millibars. One bar is equivalent to 29.6 inches.

Generally speaking, cold and warm fronts, such as tropical waves and rain, are associated with low atmospheric pressure. High atmospheric pressure on the other hand, often means bright days and a relative calm sea. For the best forecast, a top of the range anemometer should also be used in conjunction with the barometer.

Of course, while this is all critical background information, you came here to learn how having a barometer can improve your fishing experience, and how air pressure affects fish. The explanation is quite simple, though it is important to note that researchers are still looking into the matter since this is a new area of research.

The consensus of the specialists is that fish sense pressure changes with the help of their air bladder which is something that humans lack. Species that have small air bladders such as Spanish mackerel, kings, and wahoo appear not to be as affected by barometric changes as those with large bladders like redfish, trout, snapper, and tarpon.

Fish with small bladders have a body density that is much closer to that of the surrounding water, and that is why they don’t sense the changes in pressure as dramatically. Even so, since they feed on species that have big air bladders, you can still use the data you get from your barometer to guess their location.

Fish with large bladders are quick to sense when the air pressure is dropping. When the bladder expands, the fish become uncomfortable. To relieve this discomfort, they move lower in the water column, or they might absorb extra gas in their bladders.

When there’s a stable high-pressure, fish are much more comfortable, and they tend to feed pretty much anywhere within the water column. So how can you make use of low pressure and turn it to your advantage? 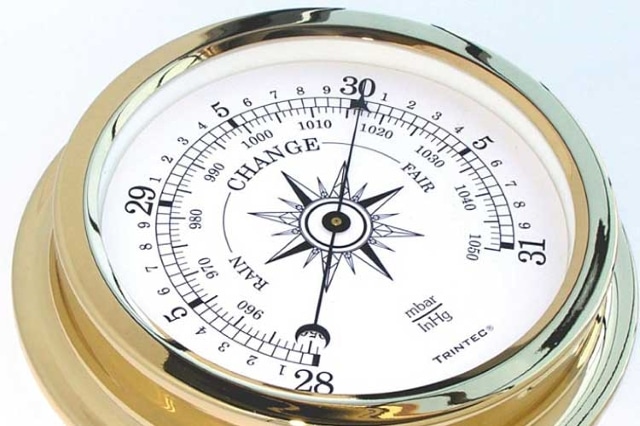 When fish sense that the pressure is about to drop, their first instinct is to start and feed heavily right before it sinks to an uncomfortable level. As the lower front approaches, they become more nervous and feed less aggressively.

When high pressures move back in, it can take at least 24 hours before fish begin to adjust to the new conditions and start to feed aggressively once again. In the case of the coast of Georgia for example, when the barometer sinks below 30 inches, anglers don’t bother fishing for big kings in less than 70 feet of water.

Instead, anglers are recommended to start fishing farther offshore, in deeper water, where the change of pressure may be less pronounced, and the fish less affected than those that were close to the shore.

What’s more, fish may be holding deeper in the water column during this period, so it would do best to try and experiment with the depth of the bait during the periods when the air pressure is lower.