Home » Meters & Cleaners » A short history of the anemometer

A short history of the anemometer

An anemometer is an instrument that is used to determine the speed of wind, a very common device in pretty much all weather stations. The word is derived from “anemos”, which means wind in Greek, and it is utilized for describing any speed of the wind in meteorology. The first known description of an anemometer was offered in 1450 by Leon Battista Alberti. 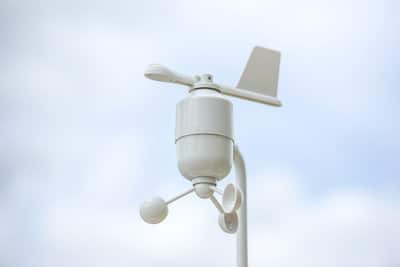 This device has been through some changes since its development from the 15th century. Leon Battista Alberti (1404-1472) is stated to have invented the first mechanical anemometer around 1450. In the centuries to follow, others developed their own versions, some of them even ended up being incorrectly credited as the inventor.

The anemometer was believed to have been created by John Thomas Romney Robinson, in 1846; that is why the cup anemometer is also known as “the Robinson cup anemometer”. The device developed by Robinson includes three or four cups that are connected to horizontal arms. At the center, the arms are attached to a vertical rod. The cups catch the wind, moving the arms and rotating the rod. The faster the wind goes, the faster the rod rotates.

So, who is this “Robinson” whose name has been connected with the invention of the anemometer? He was an astronomer and also the director of the Armagh Astronomical Observatory in Armagh, United Kingdom. He spent many years developing his theory, perfecting the invention and performing various experiments.

The original anemometer developed by Robinson stands still where he installed it, on the Observatory roof.

Since then, anemometers have been improved after electric generators were installed in the base. An electric current was generated, at the rod, in the center spun. Based on the amount of current wind speeds produced, the specially designed machines were able to read and record the speeds of the wind in multiple locations at the same time.

Modern advancements in this industry include the sonic anemometers. The device works by measuring sound waves that travel between paired transducers. The sound waves slowing or speeding represent an indication of the wind’s velocity, and it is calculated almost instantly. Dr. Andrews Pflitsch is the one who developed the sonic anemometer in 1994.

Another types of anemometers which is used widely nowadays is the revolving-cup electric anemometer, in which spinning cups drive an electric generator. The output of that generator operates an electric meter which is calibrated to the speed of the wind. The range that can be used of this device is about 5 to 100 knots. In other cases, a propeller can also be used to drive the electric generator, known as the propeller anemometer.

In the decades to follow Robinson’s anemometer, other types of devices were invented. For example, a hot-wire anemometer is used to calculate the speed of the wind by measuring how the air chills a heated wire. This is a great tool to measure low wind speeds.

If you look back in history, we have come a long way by studying, and an extensive array of measurements create the very basis of science. In order to measure things, we need special tools.

In the case of anemometers, they play a crucial role in understanding weather patterns and bringing us closer to predicting what the weather is going to be. The information can actually save lives, in case of approaching storms, tornados, or hurricanes.