The AmScope SM-4TZ-144A is a good choice for people looking for a versatile stereo microscope as its magnification range is 3.5x to 90x.

The head that this unit has been equipped with is capable of a 360-degree rotation.

As with many cutting-edge devices in the same line, this particular one has been outfitted with a proprietary illumination system that consists of a four-zone LED ring light. Controlling the brightness intensity is made available by the presence of a rheostat.

The microscope head can be positioned on three axes, Z, Y, and Z. In addition to this, the unit has a 17-inch pillar and 20-inch arms to make it possible for owners to move its parts in accordance with the samples that need to be examined.

Despite the fact that the magnification range of stereo microscopes is less impressive when compared to the one offered by compound alternatives, the fact of the matter is that it all boils down to the specimens that you will be analyzing. Although a wide array of other models in the same category offer magnification capabilities that go up to 20x, the AmScope SM-4TZ-144A can be used for many applications as its magnifying range is 3.5x to 90x.

The 360-degree rotation made available by the moving head belonging to this option is an advantage in itself, particularly when tackling the matter of educational purposes. If you have a whole table of samples that need to be analyzed, it’s far more convenient to tailor the features of the microscope and move it around instead of having to do the same with the specimens. 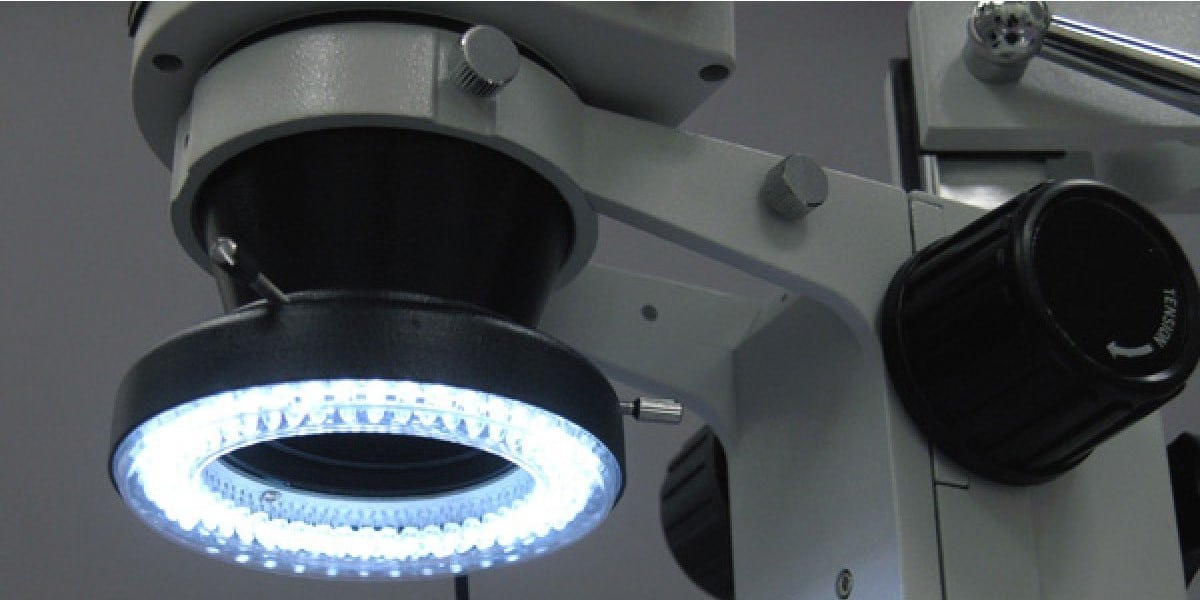 Another detail that is worth mentioning about this model is that it comes with an illumination system. However, what makes this feature stand aside from the plethora of other lighting systems we have seen in other microscope is that it consists of a four-zone LED ring light of which the brightness can be adjusted depending on your momentary needs. Based on the feedback that we have gone through, it appears that controlling the intensity is as easy as pie.

The working distance is crucial when making the difference between one model and the next. While the maximum eight-inch optical working distance of the AmScope SM-4TZ-144A might be inferior to the one of some of its competitors, it still raises up to par. Besides, it has been equipped with a head that can be moved on the X, Y, and Z axes.

The box also contains a good variety of accessories, which is why you will be getting as much value as possible if you decide to purchase this option.

One of the drawbacks of this model is that it is considerably less affordable compared to others you might come across during your research. Nevertheless, since the user feedback is favorable and we have even failed to discover a single complaint about this unit, it definitely appears to be worth considering.