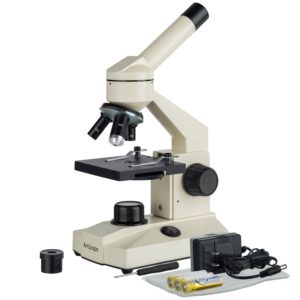 This AmScope model is outfitted with a 360-degree rotating monocular head.

Having been built out of metal, it goes without saying that it is one of the most durable models in the line.

This particular product has been equipped with an illumination system consisting of a built-in LED.

This model comes with three objectives (40X, 10X, & 40X) and with its maximum magnification capabilities go up to 1000X.

The power source for the illumination system can depend on the user’s personal preferences, in that he or she will be able to choose between batteries and an AC source.

All of the lenses used in the construction of this model have been made of glass.

A pair of clips and a dust cover is provided in the box.

This unit is outfitted with a single lense condenser complete with a disc diaphragm.

The fact that this particular AmScope model comes with a monocular head which can be rotated up to 360 degrees means that it raises up to par when it comes to applications and uses involving the educational field. If you focus on an interesting subject or smear and would like to show the image to one of your students or your children, all you have to do is rotate the head instead of asking that person to come and sit in your chair. Also, what this means is that you won’t have to tamper with the position of the specimen. 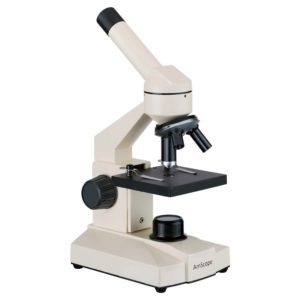 As for the construction quality of this affordable alternative, it looks as if prospective buyers really have nothing to worry about in this sense. The frame of the model is constructed out of metal, which means that it can take a lot of abuse coming from first-time users and beginners, who might be more or less clumsy when handling a microscope.

The magnification capabilities matter most when assessing the value offered by a product in this line. That’s why we have to be honest and say that we were impressed by this AmScope unit on this account as its maximum magnification goes up to 1000X. Therefore, you’ll be able to look at a wide array of specimens, and even cells if that’s what you have in mind.

Another reason why you ought to give some thought to buying this alternative is that it comes with its own illumination system. Believe it or not, there are still several older models being sold these days which do not have a light placed either under or above the specimen so that you get to see it clearly and conveniently. You won’t have to run around your house to catch some natural lighting or utilize a lamp or any other kind of light.

In spite of the fact that most of the people who’ve opted for this unit have only good things to say about its capabilities, there have been owners who complained about the lack of a set of instructions in the box.